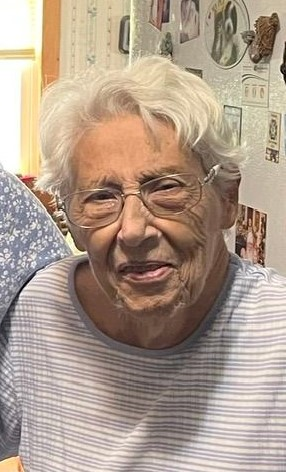 Obituary of Margaret A. Kennedy

Please share a memory of Margaret to include in a keepsake book for family and friends.
View Tribute Book
STAR LAKE- Margaret A. Kennedy, age 90, of Star Lake, NY, passed away on Wednesday, August 24, 2022 at Clifton-Fine Hospital. Services for Margaret will be at a later date. Arrangements are entrusted to French Family Funeral Home, Star Lake. Condolences, photos and memories may be shared online at www.frenchfuneralhomes.com. Margaret was born on December 8, 1931 in Newton Falls to the late Wilfred and Charlotte Latremore. She attended school in Dekalb and then went on to graduate from Watertown Business School. Margaret married Charles Kennedy on June 2, 1951, while he was serving in the Navy. They had many adventures and traveled many places. Her favorite was Key West, Florida. She often spoke of how much she loved it there. Margaret had her first child in 1953, and three more followed. She happily became a homemaker, wife and mother. She was very proud of her home and her family. Margaret enjoyed ceramics, quilting, reading and crossword puzzles. She also loved cardinals and sitting on the porch with her love of more than 70 years, sipping a glass of wine. Surviving is her husband, Charles; two sons, Charles Kennedy Jr and his wife Sue and Jeffrey Kennedy; two daughters, Deborah Finch and her husband Rodney and Cheryl Woodward and her husband Douglas Facey; two sisters-in-law, Ann Latremore and Margarete Hodge; eight grandchildren, sixteen great grandchildren and several nieces and nephews. Margaret is predeceased by her parents; her step mother, Margaret Latremore; two brothers, Leo and Wayne Latremore; two sisters, Dianne Russell and Joan and a brother, Ned Hodge. Margaret was loved by many and will be greatly missed.
To send flowers to the family or plant a tree in memory of Margaret Kennedy, please visit Tribute Store

Look inside to read what others have shared
Family and friends are coming together online to create a special keepsake. Every memory left on the online obituary will be automatically included in this book.
View Tribute Book
Services for Margaret Kennedy
There are no events scheduled. You can still show your support by sending flowers directly to the family, or planting a memorial tree in memory of Margaret Kennedy.
Visit the Tribute Store

Share Your Memory of
Margaret
Upload Your Memory View All Memories
Be the first to upload a memory!
Share A Memory
Send Flowers
Plant a Tree