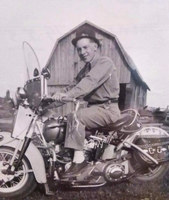 GOUVERNEUR – Charles A. Phelps, age 86, of Gouverneur, passed away on November 21, 2021 at his home under the care of his grandson and Hospice of St. Lawrence Valley. There will be no services. Arrangements are with French Funeral Home in Gouverneur. Condolences, memories, and photos may be shared online at www.frenchfuneralhomes.com. Charles was born on June 30, 1935 in Hailesboro to the late Walter and Dorothy (Dewey) Phelps. He attended Gouverneur High School and married Katherine "Katie" M. McManus on October 17, 1956 at the Gouverneur Methodist Parsonage. Katie passed away on May 20, 2021. Charles drove tractor trailer for Beacon Feed in Gouverneur until his retirement in 1987. He was a member of the S & J Hunting Club in Russell and was an avid white tail deer hunter. His survivors include a daughter, Gail Raven, and his grandchildren and great-grandchildren; three sisters, Kay and Frank French, Karen and Bradley Charlton and Kathy and Brian Mullaney. Charles is predeceased by a son, Charles W. Phelps, a daughter, Cindy L. Phelps, and brothers, Claude and Clyde Phelps. Donations in Charles' memory can be made to the Hailesboro Cemetery Association, 21 Sands Road, Gouverneur NY 13642 or the Gouverneur Volunteer Rescue Squad, PO Box 164, Gouverneur NY 13642.