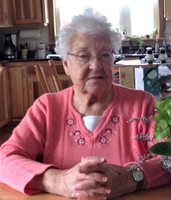 MACOMB – Jean C. Knowlton, age 97, of Macomb, passed away on Sunday, November 7, 2021 at Claxton Hepburn Medical Center in Ogdensburg. Her burial will be private. Arrangements have been entrusted to French Funeral Home, Gouverneur. Donations in Jean's memory may be made to the Gouverneur Rescue Squad. Condolences may be made online at www.frenchfuneralhomes.com. Jean was born on August 17, 1924 in Rossie to the late William and Euphemia (Wood) Laidlaw. She graduated from the Gouverneur High School in 1941 and from the McKechnic Lunger School of Commerce in Rochester in 1943. Jean married Edwin Roy Knowlton on October 20, 1946 at the Gouverneur Presbyterian Church with Rev. Joseph Schofield officiating. The couple farmed in the town of Macomb for many years. Jean worked as an Accredited Record Technician for E.J. Noble Hospital, Gouverneur for 15 years before her retirement in 1985. Mr. Knowlton passed away on September 21, 2010. Jean was a member of the Brasie Corners Church and was a member of the Macomb Grange for over 50 years. Her survivors include two daughters, Sally Gilmour of Macomb, Jane Hollenbeck of Gouverneur; and 6 grandchildren. In addition to her husband, she is predeceased by a son, Alan M. Knowlton (1966) and a grandson, Scott Hollenbeck (2001).