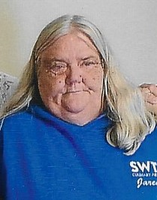 RENSSELAER FALLS – Sheril M. Robb, age 67, of Rensselaer Falls and formerly of Gouverneur, passed away on September 21, 2021 at Crouse Irving Hospital in Syracuse. There will be a graveside service held on Saturday, October 2, 2021 at 3:00 p.m. in the East Riverside Cemetery in Gouverneur. Arrangements are with French Funeral Home in Gouverneur. Condolences may be shared online at www.frenchfuneralhomes.com. Sheril was born on June 14, 1954 in Gouverneur to the late Earl and Sara (Wright) Robb. She graduated from Gouverneur High School in 1973. Sheril worked as a housekeeper for the Clearview Motel in Gouverneur and had previously worked at Braymen's in Carthage. She enjoyed playing Bingo, working on crossword puzzles, and to be on the computer. She loved being with her family and friends. She is survived by her daughter, Michele (Jason) Brown of Rensselaer Falls, a sister, Cindy (Carl Longway) McCollum of Edwards, 5 grandchildren, Janelle (Philip) Roberts, Mikayla (Sam) Rusho, Jasmine (Patrick Dumont) Brown, Jason Brown II, and Jaylin Brown, and 5 great-grandchildren. Sheril is predeceased by her longtime companion, Benjamin D. Tuttle, her parents, her brother, Ronald Robb, and a sister, Roxanna Klock.