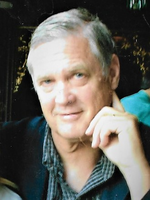 CEDAR LAKE- Richard Alexander Koch III, age 75, of Cedar Lake in the Town of Edwards, passed away unexpectedly on Wednesday, May 26, 2021 at his home. There will be calling hours for Richard on Sunday, May 30, 2021 from 11:00am-1:00pm at French Funeral Home in Gouverneur. His funeral service will immediately follow at 1:00 p.m. at the funeral home. Burial at Fairview Cemetery in Edwards will be private. Condolences and photos may be shared online at www.frenchfuneralhomes.com. Richard was born on January 23, 1946 in San Francisco, CA. He was the son of the late Richard A. and Evelyn M. (Morrison) Koch II. He graduated from Lincoln High School in San Francisco and then went on to San Francisco State and then Potsdam State University, receiving his Master's Degree in Education. On January 2, 1970, he married Jacqueline Scott at the Gouverneur Presbyterian Church. He was a teacher at the Gouverneur Central School District for 31 years, retiring in 2004. He had also taught for five years at the San Francisco Jail. Richard was a member of the Sierra Club, the Adirondack Mountain Club, the Gouverneur Library Board and the Cedar Lake Association. He was an artist. He enjoyed kayaking, hiking, rock climbing and was an avid reader. Richard also loved bicycling, and had bicycled across the country twice. He is survived by his wife, Jacqueline; a son, Richard "Ricky" Koch IV and his wife, Marcie; a daughter Michal Forkey and her husband, Chancey; two brothers, Raymond and Robert Koch and four grandchildren, Maya and Jack Weaver and Reagan and Evelyn Koch and several nieces and nephews. Donations may be made in Richard's memory to St. Jude Children's Hospital, 501 St. Jude Place, Memphis, TN 38105 or to the Adirondack Mountain Club, 814 Goggins Road, Lake George, NY 12845.