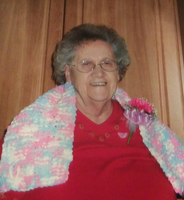 SPRAGUEVILLE – Lillian C. Kinney, age 91, of Spragueville, passed away on April 9, 2021 at the United Helpers Rehabilitation and Nursing in Canton. Lillian was born on February 21, 1930 in Prattsville to the late Henry Arnold and Jessie (Gladstone) Conine. She graduated from Gilboa High School in 1950 and from St. Margaret's Hospital for Well Babies in Albany in 1951. She married Forrest G. Kinney on July 31, 1954 in the Prattsville United Methodist Church officiated by Rev. Calado. The couple moved to Spragueville in 1954. Forrest passed away on April 11, 1999. Lillian worked as a nurse for St. Margaret's Hospital for Well Babies in New York and Connecticut before working as a caregiver for Andy Rooney's children. She then worked in housekeeping for E.J. Noble Hospital in Gouverneur until her retirement in 1991. Mrs. Kinney was a member of the Spragueville Methodist Church, the Skirts & Flirts Square Dancers, TOPS, and the Clown Ministry. She decorated and sold cakes for all occasions, drove the elderly to their appointments and errands, and was a volunteer for Hospice. She is survived by her children, Alta O'Riley, Donna Bourcy, Yvonne Fuller, Nora Stift, Rex Kinney, and Alan Kinney, and many grandchildren, great-grandchildren, great-great grandchildren, and her nieces and nephews. Lillian is predeceased by her parents, Henry and Jessie Conine, her husband, Forrest Kinney, her brother, Everett Conine, her sister, Pauline Osborn, and two grandchildren, Alan Kinney, Jr. and Olivia Moran. There will be a Celebration of Life held at the Spragueville United Methodist Church on Saturday, July 17, 2021 at 1:00 p.m. followed by burial in the Spragueville Cemetery. Arrangements are with French Funeral Home in Gouverneur. Condolences, memories, and photos may be shared online at www.frenchfuneralhomes.com. Donations in Lillian's memory in lieu of flowers may be made to the Spragueville Methodist Church or Hospice of Jefferson County.