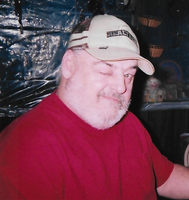 GOUVERNEUR- Samuel "Sam" E. Miller, age 68, of Gouverneur, passed away on Thursday, April 8, 2021 at the home of his son, under the loving care of his family and St. Lawrence Valley Hospice. As per Sam's request, there will be no services and viewing will be private. Arrangements are with French Funeral Home, Gouverneur. Condolences and photos may be shared online at www.frenchfuneralhomes.com. Sam was born on December 19, 1952 in Wellsville, NY to Earl J. and Alice C. (Burgess) Miller. He attended Gouverneur Central School. On January 19, 1973, he married Sharla J. Boshane at the Gouverneur Methodist Church with Rev. Stanley Brown officiating. Sharla passed away on April 11, 2012. Sam worked as a laborer for the Village of Gouverneur for over thirty years. He had previously worked at Riverside Cemetery in Gouverneur. He enjoyed playing Bingo, working on cars, hunting, drinking cold beer on the weekends, spending time with his grandchildren and getting his daily gossip at Sugar Creek. Surviving is his mother, Alice Miller-Berry of Rochester; three sons, Earl (Deborah), Billy (Elizabeth) and Samuel Miller Jr. and his companion, Jennifer Peffer all of Gouverneur; a brother, Steven (Mellissa) Miller of Gouverneur; two sisters, Sheryl (Herbert "Lester") Simmons of Gouverneur and Sally Holland of Rochester; 17 grandchildren and one great grandchild that is on the way and several nieces and nephews. Sam is predeceased by his wife, Sharla; his father, Earl and a brother, Stewart Miller.