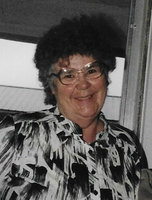 DEGRASSE – Marion E. Daniels, age 93, of DeGrasse, passed away on March 13, 2021 at Claxton-Hepburn Medical Center in Ogdensburg. Her funeral service will be held at French Funeral Home in Edwards on Friday, March 19, 2021 at 11:00 a.m. Burial will be in Pleasant View Cemetery, Clare. Condolences, memories and pictures may be shared online at www.frenchfuneralhomes.com. Marion was born on May 25, 1927 in Fine to the late Ernest and Laura (Terry) Hubbard. She attended the Oswegatchie School and married Albert Daniels on June 25, 1948 at the Edwards Methodist Parsonage. The couple lived in Fine until moving to DeGrasse in 1960 and built their home on the Dana Hill Road in 1998. Albert passed away on March 22, 2003. Marion worked in Chaney Dining Hall at Canton ATC from 1967 – 1989. Marion enjoyed watching her bluebirds, visiting with her grandchildren, Sunday dinners being made by Terry, and enjoyed knitting mittens and sweaters. She furnished many mittens for many cold hands. Marion is survived by four children, Charles Daniels of Texas, Terry and Sandy Daniels of DeGrasse, Albert "John" and Patty Daniels of South Colton, and Kathy Daniels of Russell. She is also survived by her sister, Martha Daniels, 5 grandchildren, Elizabeth, Ritch, Albert III and Andrew, and 10 great-grandchildren, Mariah, Kaleb, Ron, Roz, Ryan, Albert IV, Molly, Grace, Nolan, and Emmett. She is predeceased by her husband, Albert, and a daughter, Sheila, who died in infancy, and a grandson, Anthony. Donations in memory of Marion may be made to the DeGrasse Methodist Church, PO Box 151, DeKalb Junction NY 13630 or the Russell Rescue Squad, PO Box 536, Russell, NY, NY 13684.