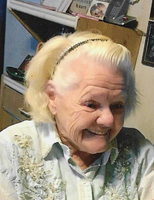 OSWEGATCHIE – Marian E. Marsh, age 92, of Oswegatchie, passed away on March 2, 2021 at Canton-Potsdam Hospital. Viewing is private for her family at French Family Funeral Home, Star Lake. There will be a graveside service held on Friday, May 7, 2021 at 11:00 a.m. in Woodland Cemetery in Fine. Condolences may be shared online at www.frenchfuneralhomes.com. Marian E. Marsh was born on November 24, 1928 in Hermon, NY, the daughter of Cleland and Dorothy J. (Hamilton) Durham. She attended school in Hermon and at Scott's Bridge in Oswegatchie. She married James E. Marsh on February 12, 1950 in the Degrasse Free Methodist Church by the Rev. Emile Mangus. The couple has lived on the Crackerbox Road in Oswegatchie since 1955, having previously lived in Russell. Mr. Marsh passed away on February 7, 2015. Marian was a homemaker who enjoyed crocheting and loved her flowers. Her survivors include three sons; James "Larry" and his companion, Brenda Finley of Oswegatchie, Roger and his companion, Alice Dooney of Star Lake, and Kevin and his companion, Liz Brassard of Ogdensburg, four daughters and three sons-in-law; Carol and Wayne Hubbard of G.A., Deborah and Bruce Finley of Frederica, DE, Sheila Finley and Chuck Strack of Star Lake and Rose and Mark Rowand of Lowville, three sisters and their husbands; Beulah and Richard Robertson of Dickinson Center, Lois and Charles Collins of Fort Pierce, FL and Betty Smith of Colton, 24 grandchildren, 28 great grandchildren, 2 great-great grandchildren with 2 more on the way, and many nieces and nephews. Marian is predeceased by her husband, James and three brothers; Milton, Harold, and Kenneth Durham.