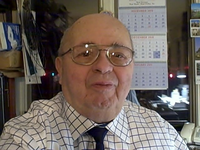 STAR LAKE – Richard Dudley Been, 55 Lake Road, Star Lake, NY died on February 7, 2021 at Samaritan Medical Center in Watertown. He was 88 years old. Mr. Been known by most everyone as Dick Been was born in Port Jefferson, L.I. on November 10, 1932 and grew up in Riverhead, L.I. He graduated from the Riverhead High School in January 1951 and from SUNY Potsdam with a BS in Music Education in 1955. Subsequently he received an MS from SUNY Potsdam and did partial study toward a MS in Sacred Music at the School of Sacred Music at Union Theological Seminary in New York City. Mr. Been taught Junior High school Choral music in the Hicksville Long Island Junior High School for 26 years. His teaching was interrupted for 2 years when he was drafted in the US Army, serving as a Chaplain's Assistant at Fort Dix, NJ. Besides teaching public school music, Mr. Been was the Organist & Choirmaster of the Hicksville United Methodist Church for 24 years. He retired from teaching and church music in 1983 and moved to Star Lake where he had purchased his home in 1974. Richard Been was an Eagle Scout. Summers while attending college he worked on the Staff at Camp Baiting Hollow on Long Island and at Camp Vigor of the Woods when it was located in Parishville, NY. In Star Lake he has been the Secretary/Treasurer of the Star Lake Fire District since 1985. After retiring to Star Lake Mr. Been developed an avid interest in British Cathedral Music and has traveled to England every year for over 20 years to attend the Southern Cathedrals Festival and the Edington Festival of Music Within the Liturgy. Besides his duties as Secretary/Treasurer of the Star Lake Fire District, Mr. Been was the President of the Board of Director of Star Lake Housing for 18 years and has acted as Treasurer and Verger of Ascension Episcopal Chapel in Star Lake for many years. He was preceded in death by his parents Walter G. Been and Jeannette Morris Been. He is survived by one sister, Jeannette (Jean) B. Stevenson in Marietta, GA, and 2 nieces and 2 nephews, also living in Georgia. There will be no public calling hours or services. Arrangements are with French Family Funeral Home in Star Lake. Condolences may be shared online at www.frenchfuneralhomes.com.