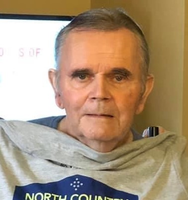 HERMON- Roger N. Willard, age 70, of Hermon, passed away on Saturday, November 28, 2020 at St. Joseph's Nursing Home in Ogdensburg due to a long battle with Parkinson Disease. There will be calling hours for Roger on Tuesday, December 1, 2020 from 3:00-6:00 p.m. at French Funeral Home, Gouverneur. Masks and social distancing are required. His funeral service will be private for the family. Condolences may be shared online at www.frenchfuneralhomes.com. Roger was born on June 25, 1950 in Hermon, NY to the late Earl and Dorothy (Hendricks) Willard. He graduated from Knox Memorial School in Russell in 1968 and then went on to Canton ATC for two years. He married Sharon Paige on July 3, 1971 in Gouverneur. Roger worked for 36 years for the St. Lawrence County Highway Department. He enjoyed hunting, going to the casino, and being with his grandchildren. He and his wife also ran a hobby farm for many years. Surviving is his wife, Sharon; a daughter, Sherry and John Wilson Jr. of Ogdensburg; twin sons, Mark and Mike Willard, both of Hermon; four brothers, Kenny, Liston and Susan, Ronnie and Joyce and Larry and Carol Willard; a sister, Vicky and Warren Franklin and five grandchildren, Liam Willard, Adam Lucas, Carlin Miller, Baylee Wilson and Mia Wilson, and several nieces and nephews. Donations may be made in Roger's memory to Russell Volunteer Fire Department, 5 Pestle Street, Russell, NY 13681 or Parkinson Foundation, 710 West 168th Street, 3rd Floor, New York, NY 10032.