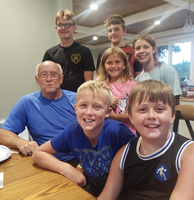 GOUVERNEUR- Frederick F. Colton, age 76, of Gouverneur, NY, passed away on Sunday, November 22, 2020 at Canton-Potsdam Hospital. Frederick was born on August 13, 1944 in Canton, NY to the late Frederick and Alice (Whitmarsh) Colton. He graduated from Knox Memorial Central School in Russell in 1964 and then entered into the United States Army and served during Vietnam until his honorable discharge. He married Cheryl Hodgdon on July 3, 1965 at the Russell United Methodist Church. He worked at Natural Dam Paper Mill as a machine tender and electrician from 1965 until his retirement in 2009. He loved being on Sylvia Lake, going on boat rides, riding the golf cart around and spending time with the grandchildren. He was often seen at the grandchildren's sporting events, as there was rarely a game of theirs that he would miss. Fred is survived by his wife, Cheryl; two sons, Shawn and Krisi Colton of Syracuse and Shannon and Stacey Colton of Central Square; two daughters, Sara Colton of Watertown and Staci and Luke Hayden of Gouverneur; a sister, Linda Markell of Prescott, Ontario and nine grandchildren, Tyrell Thomas, Chelsea Colton, Tyler Colton, Ryan Colton, Tate Colton, Jordan Hayden, Jimmy Hayden, Colton Hayden and Sophi Hayden. Fred is predeceased by a sister, Beverly Monroe. Due to the current pandemic, there will be no services at this time. There will be a celebration of his life at a later date. Arrangements are with French Funeral Home, Gouverneur. Condolences may be shared online at www.frenchfuneralhomes.com. Donations may be made in Fred's memory to Wounded Warrior Project, P.O. Box 758516, Topeka, KS 66675 or to St. James School, 20 South Gordon St., Gouverneur, NY 13642.