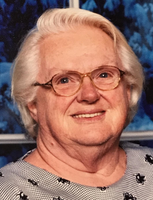 GOUVERNEUR- Helen L. Stacy, age 81, of Gouverneur, passed away on November 21, 2020 in United Helpers Maplewood Nursing Home in Canton. Helen was born on April 28, 1939 in Gouverneur, NY to the late Robert and Gartha (Stevens) Stacy. She graduated from Gouverneur Central School. She married Carlton H. Simmons Sr. on September 1, 1957. The couple were married for 37 years, until they divorced. She cleaned at Pine Camp, and then also when it became Fort Drum. She was also a bus driver for LaForty and then Indian River Central School, retiring in 1976. She loved her cats, doing puzzles, knitting, traveling and watching her grandchildren and great grandchildren. Surviving is two sons, Carlton and Flo Simmons Jr. and Stanley and Diane Simmons; a daughter, Malinda Bright; 14 grandchildren and several great grandchildren and nieces and nephews. Helen is predeceased by her parents; a daughter, Sharon Sue Main; a son-in-law, Richard Bright; two brothers, Harold and Herbert Stacy and two sisters, Shirley Taylor and Marion Davis. Services will be private for the family. Arrangements are with French Funeral Home, Gouverneur. Condolences may be shared online at www.frenchfuneralhomes.com.