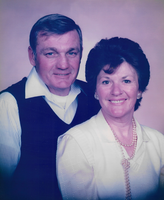 FOWLER – Barbara R. Brown, age 81, of Fowler, passed away on November 12, 2020 at her home under the care of her family and hospice. Her burial will be private in the Fairview Cemetery in Edwards. Condolences may be shared online at www.frenchfuneralhomes.com. Barbara was born on April 17, 1939 in Russell to the late Ellis C. and Agnes (Brayton) Denton. She attended the Knox Memorial High School and married Ernest K. Brown on August 20, 1956 at the South Edwards Methodist Church. The couple lived in Hermon before moving to Fowler in 1983. After 48 years of marriage, Ernest passed away on August 23, 2004. Mrs. Brown loved cooking, baking, and spending time with her family. She was a member of TOPS in Fowler and had fun while going to the meetings. Barbara enjoyed working in the garden, working around the house, and dancing. Her survivors include her three children, Ernest (Laurie) Brown Jr. of Cicero, Kerry (Laurie) Brown of Richville, Cammy (Daniel) Morrison of Pillar Point; and 6 grandchildren. She is predeceased by a grandson, Allen Brown and her siblings, Ellis "Junior" Denton, Clarence Thompson, Erline Brown, Belva Crump, and Lois Denton. Donations in memory of Barbara may be made to Hospice of St. Lawrence Valley, 6805 US Hwy 11, Potsdam NY 13676 or the Gouverneur Rescue Squad, PO Box 164, Gouverneur NY 13642.