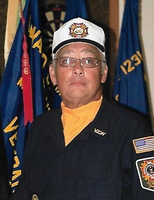 Clare – Ronald J. Tebo, age 71, of Clare, passed away on September 12, 2020 at Claxton-Hepburn Medical Center in Ogdensburg. Ronald was born on May 28, 1949 in Gouverneur, the son of the late Raymond and Irene (Palmer) Tebo. He graduated from the Knox Memorial High School, Russell, in 1967. Mr. Tebo served in the U.S. Army from 1967 until his honorable discharge in 1970. He received the Vietnam Campaign Medal and a Bronze Star. After the closing of the Newton Falls Paper Mill, with thirty years as a tow motor operator, he furthered his education in the Individual Trades at SUNY Canton. Mr. Tebo has lived in the Russell area for most of his life. A marriage to Nancy Hennigan ended in divorce. Ronald enjoyed old cars and working on them. His other hobbies included hunting, fishing, and woodworking. He was a member of the Canton VFW and a former member of the Potsdam AMVETS and the Potsdam American Legion. His survivors include his two daughters, Deborah (Donald) Fountain of Russell, Leslie Tebo (companion, Bryan Cheapé) of Buffalo; his son, Timothy Tebo (companion, Susan Smith) of Potsdam; two brothers, James (Cherie) Tebo of Edwards, Bruce Tebo of Raymondville; and three sisters, Joanne Tebo of Rochester, Susan Tebo of Raymondville, and Tammy Tebo of Potsdam. He is also survived by five grandchildren, Janna and Mason Fountain, Jackson Cheapé, and Dillon and Brody Smith, and several nieces and nephews. He is predeceased by a sister, Sharon Carlin. Following Ronald's wishes, there will be no public calling hours or service. Private burial will be in the Pleasant View Cemetery, Clare. Donations in his memory may go to the D.S.R.C. Fire and Rescue Squad. Arrangements are being handled by French Funeral Home, Edwards. Condolences may be shared online at www.frenchfuneralhomes.com.