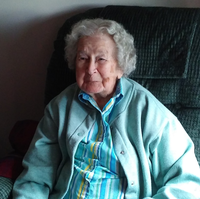 GOUVERNEUR – Masie Martina Facey, age 96, formerly of Gouverneur and DeKalb Junction, passed away on September 8, 2020 at United Helpers RiverLedge Nursing and Rehabilitation in Ogdensburg. Viewing is private for her immediate family. There will be a graveside service held in the Hailesboro Cemetery at a date to be announced later. Arrangements are with French Funeral Home in Gouverneur. Condolences may be shared online at www.frenchfuneralhomes.com. Martina was born in Spragueville on June 25, 1924, the daughter of the late Ralph Simmons and I. June Savage. She attended local schools in both Spragueville and Gouverneur. On November 9, 1940 she married Rupert Mullins, which ended in annulment. She married Eugene Facey on July 25, 1971. Mr. Facey died February 8, 1980. Martina worked for Robinson Hardware, E. Harold Cole Hardware and the Gouverneur Co-op as a clerk, before leaving to help her husband run the family farm in 1971. They left farming in 1978 due to Mr. Facey's health, retiring in Florida. There Martina worked at a local motel in housekeeping. Finally, she went back to being a clerk in area stores until retiring in 1996 and returning to Gouverneur. She enjoyed playing cards, putting puzzles together, square dancing, and traveling as much as possible. She visited almost all 50 states and toured England and was proud of her travels. She was a member of DeKalb-Hermon Senior Citizens, Black River Valley Fiddlers, and the Gouverneur VFW Ladies Auxiliary. Martina is survived by her grandchildren; Murl (Carrie O'Dell), Glen (Patti) and Tina Hogle, 6 great-grandchildren, 13 great-great grandchildren, her treasured nephew, Walt Golden, as well as several other nieces and nephews. She is predeceased by her daughter and son-in-law, Carol "Cookie" and Wayne Hogle, sister, Veronica Golden, brothers, Maynard, Murl and Melvin Simmons, her parents, and step-father who raised her, Glen Hall. At the family's request, please omit flowers. Donations may be made to Hermon-DeKalb Senior Citizens, Hermon Volunteer Rescue Squad, or a charity of your choice.