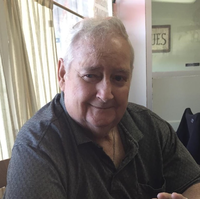 EDWARDS – Charles "Chaz" E. Typhair, age 82, of Edwards, passed away on July 12, 2020 at the Clifton-Fine Hospital in Star Lake. There will be a graveside service held on Wednesday, July 15, 2020 at 12:00 p.m. in the South Edwards Cemetery. Arrangements are with French Funeral Home in Edwards. Condolences may be shared online at www.frenchfuneralhomes.com. Charles was born in Gouverneur on April 22, 1938, the son of Frank Typhair and Evelyn (Moore) Typhair. He grew up in Edwards and graduated from Edwards Central School in 1957. That fall he and 3 other Edwards boys joined the United States Navy. He went through basic training in Great Lakes, IL then was assigned to radio school in Bainbridge, IN. Upon graduating from there he was assigned to the Flagship of the 6th Fleet in the Mediterranean with the Flagship, The Heavy Cruiser USS Des Moines CA 134. Completing his tour there he was stationed in Londonderry Northern Ireland. On October 25, 1961 he married Lavina Javall in the Methodist Church in South Edwards. He was discharged from the Navy in March 1962. He then went to work for the United Bank in Star Lake. Four years later he went to work for the Newton Falls Paper Mill where he worked for the next 31 years; mostly as a Foreman and retired in 1994 as a Converting Supervisor. Chaz is survived by his 2 sons, Tracy Typhair and Lynda Englert and Shawn and Renee Typhair, foster son, Jeff and Maryanne LeSiege, 3 grandchildren, Walker Typhair, Rylee Typhair, and Ryan and Miranda Wignall, and 2 great-grandchildren, Brinley and Rilynn Wignall. His grandchildren and great-grandchildren meant everything to him and he loved spending time with them. He also enjoyed camping and going out to eat, especially at the Silver Leaf Diner, so he could visit with people. He was predeceased in death by his parents, his wife, Lavina, a son, Charles, a sister, Sally, and a brother, John. He was a member of the Edwards Lions Club, the American Legion Post 1539 and the VFW. In lieu of flowers send your donations to the Edwards Lions Club, PO Box 290, Edwards NY 13635.