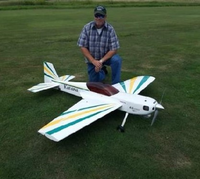 RICHVILLE/SYRACUSE – Steven "Steve" R. Streeter, age 53, of Syracuse and formerly of Richville, passed away on July 1, 2020 at Crouse Hospital. Funeral arrangements with French Funeral Home in Gouverneur are private. Condolences may be shared online at www.frenchfuneralhomes.com. Donations in Steve's memory may be made to the American Cancer Society. Steven was born on August 12, 1966 in Gouverneur to the late Ronald G. and Patricia R. (LaPoint) Streeter. He graduated from Gouverneur Central School in 1984 and served in the United States Navy for eight years as an AW2 flying on the P-3 and the S-3 from 1985 until 1993 and in the NY Air National Guard for an additional eight years where he worked in Communications. After his military career, Steve worked as a technician for Securitas. A marriage to Debbie Joyce in May of 1994 ended in an amicable divorce. Steve had a great passion for building and flying radio-controlled airplanes, but didn't like drones. He was a very technologically talented man who also loved his cats. He is survived by his siblings, Michael and his wife, Marsha Streeter, Wayne Streeter, Martin Streeter, and Christine Hale, step-siblings, James Beard, Debra Reynolds, and Dawn Kalbfliesh. Steve is predeceased by his parents, his step-mother, Shirley (Bearden) Streeter, and a brother, Milton Streeter.