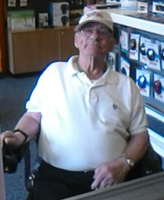 GOUVERNEUR – Joseph H. Wing, age 84, of Gouverneur, passed away on February 7, 2020. Calling hours will be held at French Funeral Home in Gouverneur on Monday, February 17, 2020 from 12:00 – 2:00 p.m. His funeral service will follow at 2:00 p.m. at the funeral home. Burial in Riverside Cemetery will be in the spring. Joe was born on April 21, 1935 in Ogdensburg to the late Joseph Lawrence and Eleanor (Mallette) Wing. He attended school in Ogdensburg and had worked as a janitor for the Ogdensburg Police Department. He married Irene N. Prashaw on August 29, 1976. Irene passed away on September 6, 2012. A previous marriage to Hazel Butterfield ended in divorce. Joe was dedicated to his country and his community. For many years he lead the Gouverneur Fire Police, dedicating time at accident scenes, fairs, and festivals providing crowd control and parking assistance. He was the Junior Vice Commander of the VFW Auxiliary and received a citation in 2018 pronouncing him "Mr. Gouverneur". He was an honorary member of the St. Lawrence County Sheriff Department. In his younger years Joe enjoyed singing Country Western music and was known as "Smokie Joe Wing". His survivors include six children, Joseph A. Wing, Frederick A. Wing, Julie A. Daniels, Carol M. Mathie, Tonya Fuller, and Thomas H. Folsom, his brothers, Thomas Wing, Ford and Pauline Wing, Michael and Zora Wing, and Leonard Wing, and several grandchildren, great-grandchildren, nieces, nephews and cousins. He is predeceased by his wife, Irene, a daughter, Patsy Wing, sister-in-law, Sue Wing, and two grandchildren, Leonia and Audrey Fuller. Donations in memory of Joe may be made to the Gouverneur VFW or the American Heart Association. Condolences may be shared online at www.frenchfuneralhomes.com.