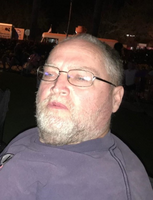 STAR LAKE – Robert "Bubba" J. Streeter, age 64, of Star Lake passed away on August 17, 2022 at University Hospital at Strong Memorial Hospital in Rochester after battling cancer for many years. There will be a funeral Mass held on Friday, August 26, 2022 at 11:00 a.m. at St. Hubert's Catholic Church in Star Lake followed by burial in St. Hubert's Cemetery. His family will hold a Celebration of Life at the Star Lake Fire Department after the burial. Arrangements are with French Family Funeral Home in Star Lake. Condolences, memories and photos may be shared online at www.frenchfuneralhomes.com. Robert was born on January 30, 1958 in Star Lake to the late Jesse R. and Lillian (Isereau) Streeter. He graduated from Clifton-Fine Central School in 1976 and began working at the Newton-Falls Paper Mill. He moved to California for a short time, then returned to Star Lake. He moved to Florida, living there for approximately 30 years, working at multiple golf courses. In 2015 Bubba moved back to Star Lake to help care for his father. Bubba was a lovable guy who loved to watch and listen to sports. He was a huge Florida Panthers fan and an ex-New York Rangers fan. He also enjoyed attending Clarkson Golden Knights hockey games. Bubba like to play golf and was a salt water fishman. He loved his family and was a wonderful uncle to his nieces and nephew. He is survived by his three siblings, Richard Streeter and his companion, Heidi, Michael Streeter and his wife, Cami, and Melissa Streeter and her companion, Tom. He is also survived by his nieces, a nephew, and friends. Bubba is predeceased by his parents, Jesse and Lillian Streeter. Donations in his memory may be made to the American Cancer Society Hope Lodge, 1120 Goodman Street South, Rochester NY 14620 or at https://donate3.cancer.org/?campaign=hopelodgerochesterny&_ga=2.165957950.1438840278.1660839704-212598060.1660839703.