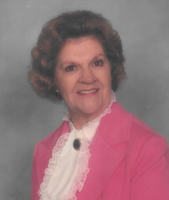 GOUVERNEUR- Cecile Rita (LaPierre) Holt, age 102, of Gouverneur, passed away on June 17, 2022 at Gouverneur Hospital. Calling hours will be held at French Funeral Home, Gouverneur on Monday, June 27, 2022 from 11:00 a.m. – 12:00 p.m. followed by her funeral service at 12:00 p.m. Burial will follow at East Riverside Cemetery. Condolences, memories, and photos may be shared online at www.frenchfuneralhomes.com. Donations may be made in Cecile's memory to a charity of one's choice or give a mass card. Cecile was born on January 30, 1920 in Tupper Lake, NY to the late Homer and Minnie (Villeneuve) LaPierre. She attended school in Tupper Lake. Cecile married Richard A. Holt on February 11, 1939 at the Gouverneur Methodist Church. The couple renewed their vows in 1943 in Buffalo by priest. Richard passed away on December 4, 1967. Cecile worked most of her life. She had worked at Grant's Department Store and JJ Newberry's. When they were first married, she and her husband owned the Bowling Alley and Billiard Room that was over top of Sal Kaplain's Department Store. They also owned the Airport Tavern. Cecile is a member of the Our Lady of Fatima and the Immaculate Heart of Mary. She enjoyed playing bingo and going to the casino. She was an avid bowler for many years. Cecile also used to enjoy hunting, fishing and camping with her husband, walking, playing cards, knitting and crocheting. Surviving is a son and his wife, Richard and Roseanne Holt of DeKalb; a daughter, Donna Gaumes of Gouverneur; 6 grandchildren, Lori, Robin, Cory, Shannon, Jennifer and Ricky; 11 great-grandchildren, Danny, Jake, Courtney, Cody, Dravin, Britton, Kade, Radin, Jerride, Abbigail and Kyle; 3 great-great grandchildren, Ora, Cassius and Cohen, and many nieces and nephews. Cecile is predeceased by her husband, Richard Holt, a daughter, Patricia "Patty" Bigarel, great-grandson, Robert Holt, son-in-law, Leonard Gaumes, and all fourteen of her siblings, Anita LaPierre, Alfred LaPierre, Roma LaPierre, Yvonne Kitts, Anita Hull, Renee LaPierre, Rose LaPierre, Teresa Kelsey, Betty Sherry, Ellen Jean LaPierre, twins that died at birth and Homer LaPierre Jr.